Find our products at the Tarot Garden store and very soon on our e-shop. Stay tuned ! 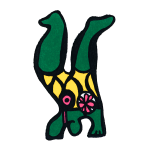 “I thought it was a shame that everyone couldn’t afford to have a work of art. These are for sale in stores for 2, 4 or 8 dollars. So they are a mass-produced art object.” – Niki de Saint Phalle, quoted from the film Niki de Saint Phalle by François de Menil and Monique Alexandre.

In 1968, Niki de Saint Phalle created her first “inflatable” Nana, and titled it “Nana ballon”.
Initially, her sister Elisabeth distributed them to children in Harlem, New York during the installation of the Paradis Fantastique in Central Park, New-York.

Niki de Saint Phalle soon realized how editions, series, jewelry, prints and a variety of mass-produced objects could give her financial independence. It enabled the artist to continue being her own patron and finance her projects, mainly the construction of the Tarot Garden.

Once most of the structures for the Tarot Garden were built, Saint Phalle created merchandise specifically for the garden. Today, the Tarot Garden continues the production with these manufacturers that had worked with Niki de Saint Phalle, while also new vendors have been added to the roster to ensure quality and integrity for our customers. The majority of items in our Shop are made in Italy and Europe in extension.