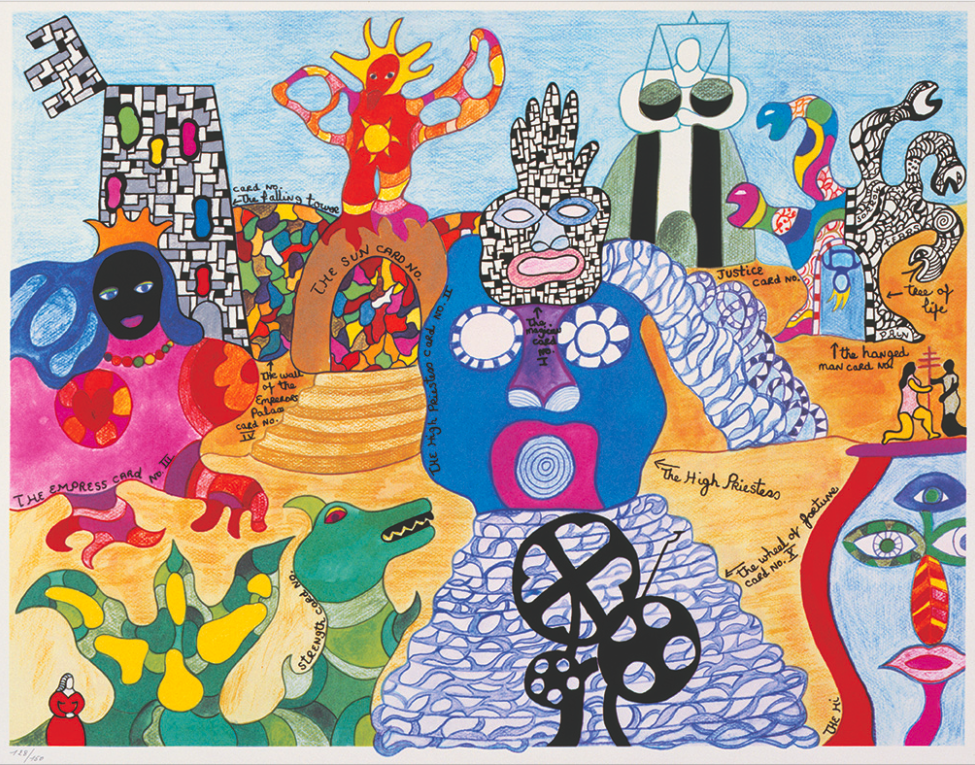 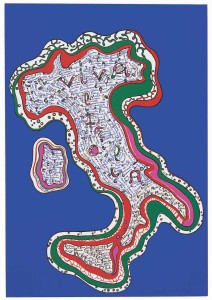 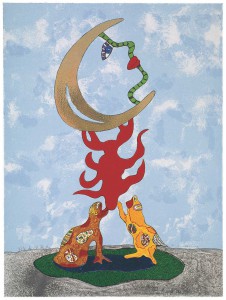 The Niki Charitable Art Foundation (NCAF) welcomes educational interaction and learning through Niki’s art. On its website, please take a look to art projects that can be done using simple materials in school settings guided by education professionals, or at home with parental and instructional guidance.

Below-posted is the lesson plan about the Tarot Garden.
Students will learn about Tarot Cards and their symbolism, modeled by Niki de Saint Phalle’s designed deck and create a Tarot Card of their own. 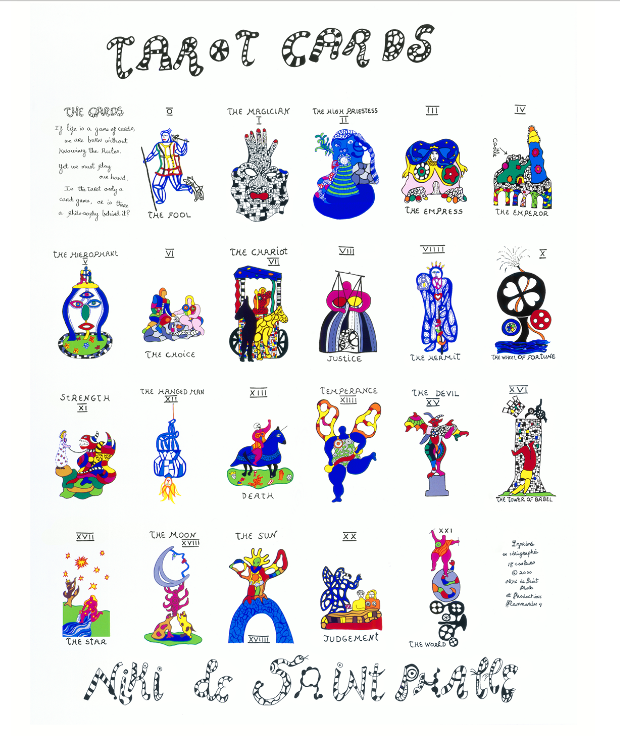 Students will learn about Niki de Saint Phalle’s Personal & Artistic Biography, highlighting one of her major works, the Tarot Garden. Students will analyze symbols on the Tarot Cards to learn to express visual meaning and create their own Tarot Card.

Using a variety of Tarot Card examples, students will make their own version of a Tarot Card. Students will use color theory, symbolism, and the principles and elements of design to paint their own rendering of a Major Arcana Tarot Card

Art in the making: what is Tarot?

It is an ancient card game consisting of 78 cards. There are 22 Trump cards also known as Major Arcana, and 4 suits consisting of 10 number cards and 4 court cards. Each card is loaded with symbols. The Major Arcana has 22 cards, each with its own title and meaning. Some universal symbols include the Sun, the Moon, Death, Strength, the Tower, and the Star.

Niki created her own version of the Tarot Cards in drawings and then made them into sculptures. Sometimes as an artist, you can use already existing material to inspire you, and create your own version of it. Instead of using the same images that someone already made, you can transform them and making them into your personal rendering. 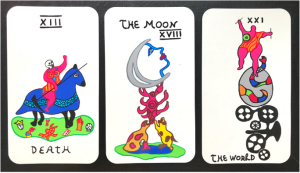 Take a closer look at the these cards done by Niki de Saint Phalle, What can you take away from her choice of color? 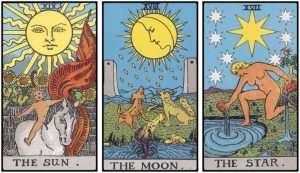 Take a look at the examples from the Rider-Waite Tarot, what type of compositions are used? Are the titles easily recognized in the imagery of each card?

PREPARE:
At the beginning of lesson have students quickly draw:

Then have them draw less universal symbols:

Later, compare and contrast similarities of symbols  on the first list vs the second list. Highlight how the simple symbols all look similar but have their own flair; whereas, those of the second list look different in everyones own version. This brings back the idea and awareness of universality in symbols and individuality in production. 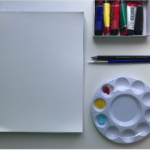 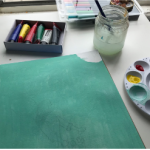 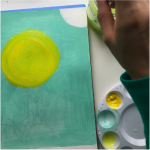 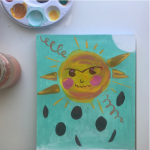 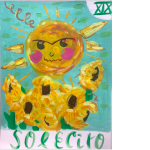 -EVENING OF JAZZ MUSIC edited by the record company GIANDO MUSIC : date to be defined

–AUGMENTED LIBERTY exhibition spread in the village of Capalbio with works in AUGMENTED REALITY, exhibition of the originals in the Gallery Il Frantoio and in the Castle of Capalbio from 15 July to the end of August.

DJ SET_ PERFORMANCE with artists in the Galleria il Frantoio

from1st to 31th of  March from 8 am to 4 pm  (not Saturdays and Sundays  and public holidays).

1 April to 15 October 2.30 pm to 7.30 pm (in these days we do not  take group bookings: Easter-Monday of the angel – 25th April-1st May-2nd June)
January to March and November to December, the first Saturday in the month, from 9am to 1pm, the park’s founder Niki de Saint Phalle has decided to grant all visitors free entry. If this Saturday falls on a public holiday, the  Giardino  will open the following Saturday.